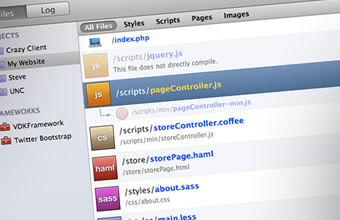 On every project, I eventually find myself having to work directly on assets on a live server.  But what if I wanted to use the power of CodeKit & LESS on my live site? It's surprisingly easy to set-up, as long as you have the right tools…

CodeKit is a web development tool for Mac, written by Bryan Jones (follow him on Twitter here).  At it's most basic level, it runs "behind the scenes" of your usual IDE (I use the excellent Coda).  It compiles LESS, SASS, Stylus and other code files as you work – it provides error checking and minification for CSS and Javascript amongst others.

It's been around for a few months – still in Beta stage, but from what I can see, pretty much ready to go.

It basically allows you to develop your sites using LESS (or one of the others) without the need to load the LESS dependency (a small Javascript file which normally does the compiling for you when you load the site).

It's smart. Really smart. I would suggest you check out the website and Bryan's excellent videos to get a better grasp of what it can do for your workflow.

LESS is described as "the dynamic stylesheet language". I'm not fluent with LESS yet, I hadn't dived-in with everyone else partly because I've been busy of late, and partly because I was hesitant due to it's apparent reliance on Javascript to work correctly.

LESS allows you to use Javascript-style variables and functions within your CSS, and to construct CSS in a way that's far more structured and manageable in the future.  The logic is pretty simple and easy to get to grips with. Go check out the LESS website now for more information and code examples.

Here's what you will need in order to work directly on your live server/website with CodeKit:

How to set it up

CodeKit will recognise the changes you make as you save the files.  You may need to wait a few seconds longer for the data to be transferred (compared to working locally, which is instant), but it works perfectly.

I had some issues with this method today – at first I thought it might be a combination of attempting to use a local CodeKit framework with imports into the remote LESS file, however it turned out to be because I was editing the remote files via FTP.

For some reason, CodeKit does not recognise these edits, and the file (no matter how many times you save, or refresh the project in CodeKit) will stay as it is. Looking at the folder structure, there are some hidden files generated by CodeKit which could be to blame (cache files perhaps?).

Anyway, the workaround is to simply edit the files as if you were working locally, so just drag the mounted files/structure (how you do this depends on the IDE of course) into your IDE and edit then as if they were local files. CodeKit then recognises the changes and works as normal, including importing any framework files you're referenced.

Oh, and if you use Coda, I also found a useful syntax highlight mode for LESS, which you can download here:

Update 2: Working with CodeKit and Dropbox

So, after trying remotely working like this on a bigger project, I soon hit some problems – disconnection errors, FTP limitations, that sort of thing.  If these occur mid-save, that can help you lose some data, which is never a good thing.

It's worth pointing out that these problems are not the fault of CodeKit; just limitations with server hardware, setup and that sort of thing.

I didn't want to move the development work locally (it makes it too hard for things like client approvals), so looked into other ways of working remotely, and Dropbox provided the answer.

You'll need an account with Dropbox of course (sign up with my affiliate ref and get an extra 250Mb here), as we'll be using it's Public Folder feature to store our compiled CSS.

How to set it up

That's pretty much it. When you edit and save any of your imported LESS files, CodeKit will compile the CSS, save it to Dropbox, and Dropbox will instantly update the online version.  Due to the generally small size of CSS files, this should only take a couple of seconds and you'll be able to refresh and see your changes.

How to deal with relative CSS image paths

LESS makes it easy to fix any path issues – obviously unless you save all of your images within your Dropbox public folder, they won't show up because the path will be incorrect.

To fix this, set a less variable for your site's Base URL:

Then, simply reference this variable every time you want to use an image in your CSS:

There are 13 awesome comments...